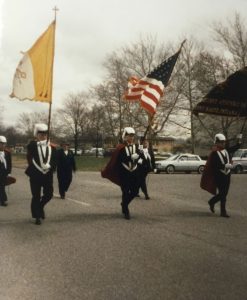 After taking their third degree, knights are eligible to receive their fourth degree, the primary purpose of which is to foster the spirit of patriotism and to encourage active Catholic citizenship. Fourth degree members, in addition to being members of their individual councils, are also members of Fourth Degree assemblies which typically comprise members of several councils. As of 2013, there were 3,109 assemblies worldwide.

Fourth Degree Knights may optionally purchase and wear the full regalia and join an assembly’s Color Corps. The Color Corps is the most visible arm of the Knights, as they are often seen in parades and other local events wearing their colorful regalia. Official dress for the Color Corps is a black tuxedo, baldric, white gloves, cape, and naval chapeau. In warm climates and during warm months, a white dinner jacket may be worn, if done as a unit.